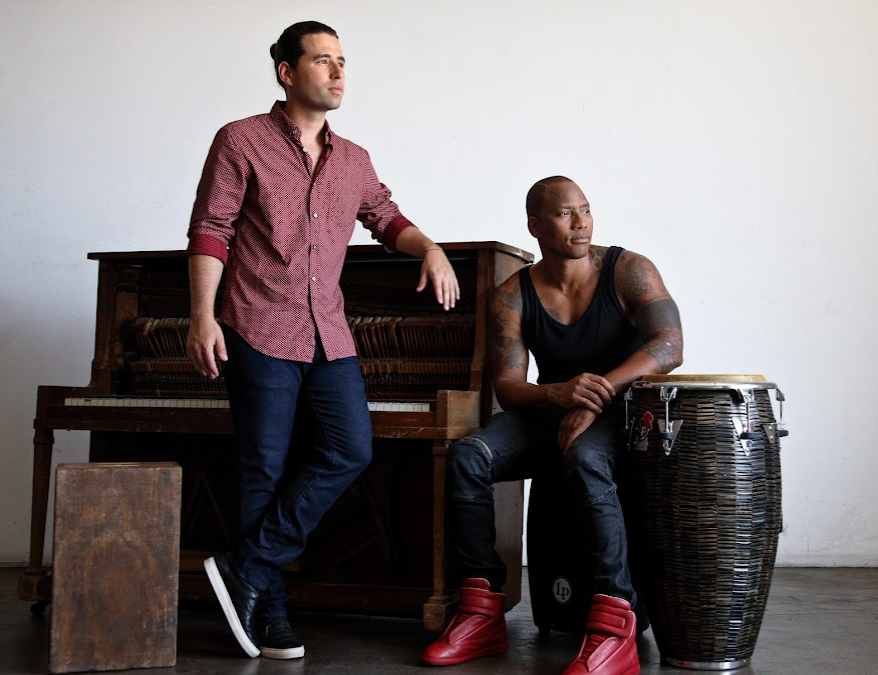 The Weis Center for the Performing Arts will welcome Cuban street percussionist Pedrito Martinez and Classical piano prodigy Alfredo Rodriguez on Thursday, October 27 at 7:30 p.m. at the Weis Center.

The performance is sponsored, in part, by Evangelical Community Hospital, ViaMedia and Jazz at Bucknell.

Painted in the broadest of strokes, the stories of Alfredo Rodriguez and Pedrito Martinez may seem similar: both started life in Havana, discovered their gifts and passions for music and headed to the States, where they melded the music of their homeland with a wide variety of influences, each in his own deeply personal way.

Zoom in a little, though, and the two paths differ considerably. Rodriguez was born into a musical family — his father a popular singer and TV host. A child prodigy, he studied classical piano at the prestigious Conservatorio Amadeo Roldán and Instituto Superior de Arte while playing popular music in his father’s orchestra by night. While performing at the Montreux Jazz Festival in 2006, he was discovered by his future mentor and producer, the legendary Quincy Jones.

Martinez, on the other hand, honed his craft on the streets of Havana, learning the deeply-rooted percussion and vocal style of Afro-Cuban folkloric and religious music. This master percussionist and vocalist arrived in the United States in 1998; was soon awarded first place at the Thelonious Monk Institute of Jazz International Afro-Latin Hand Drum Competition, and appeared in the documentary Calle 54. He then co-founded a Latin-fusion group, Yerba Buena, with which he toured extensively and recorded several successful albums. Martinez has performed or recorded with Wynton Marsalis, Sting, Bruce Springsteen, Paul Simon, Angélique Kidjo, Chucho Valdés and James Taylor. He has been a leader of his own quartet since 2005 with a Grammy-nominated album released in 2013 on Motéma Music.

As a result of their differences, Rodriguez and Martinez share a natural chemistry that makes for a galvanizing musical experience when they come together. Their first duo album, Duologue, finds the pair exploring a range of moods and influences, from Cuban classics to collaborative original compositions to a number of unexpected favorites.

NPR’s Felix Contreras said, “Each is on his own musical trajectory…it’s a joy to hear their visions combine.”

PLEASE NOTE
Bucknell’s face covering requirements follow CDC guidelines, based on current rates of transmission of COVID-19 in Union County. When transmission rates are high, face coverings are required of everyone in all public and academic indoor campus spaces, including the Weis Center. Masks are not required indoors when transmission rates are low or medium. This guideline applies to all visitors regardless of vaccination status. Please always have a mask available when you are on campus. KN95s are recommended. To view Bucknell’s current status, visit bucknell.edu/COVID-19.