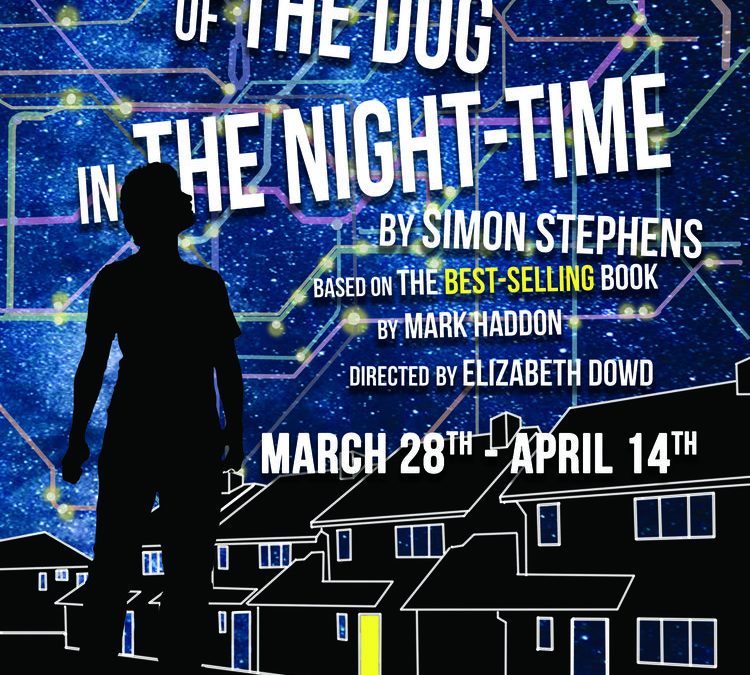 Bloomsburg Theatre Ensemble (BTE) is proud to continue its 41st Season of live, professional theatre with the next Mainstage offering, The Curious Incident of the Dog in the Night-time. The play runs March 28th through April 14th, 2019 and is written by Simon Stephens, based on the best-selling novel by Mark Haddon.

Director and Ensemble Member Elizabeth Dowd describes the production, “It is based on an enormously popular, award winning book – first published as young adult fiction and then re-released as an adult read. It’s a compelling, surprising, disturbing, empowering story with a 15 year old hero.”

Making their BTE debuts are first-time guest actors Stephen Fala and Lindsey Weiss. Stephen is a Philadelphia area actor who comes to Bloomsburg most recently from a tour of Paw Patrol: Live!. About Curious Incident, Stephen, who plays Christopher, says, “The coolest thing about this show is you are seeing the world from inside a mind that doesn’t think like anyone else…..Christopher is such a unique, young mind and the audience gets to see he world the way he sees it….the way that we do that with the movement and the technology we have is just incredible.” Director Dowd concurs, “During Christopher’s journey, the play allows the audience to experience for themselves the effects of sensory overload experienced by some neuro-atypical people.”

Lindsey Weiss, who plays various roles, is a New York-based actor and recent graduate of Northwestern University’s BA Theatre program. Lindsey is proudly autistic and an advocate for disability inclusion in every arena of society.

Rounding out the cast are most of the Ensemble (James Goode, Andrew Hubatsek, Laurie McCants, Daniel Roth and Eric Wunsch in various roles) and returning guest actors Samantha Norton (seen at BTE in Good People, A Very Special Christmas Special, and Ghost-Writer); Lydia St.Clair (seen in Doubt and Finding our Voices), and McCambridge Dowd-Whipple (seen most recently as The Ghost of Christmas Present in BTE’s 2017 production of A Christmas Carol) in various roles.

Curious Incident also features theatrical technology never before seen on the Alvina Krause Theatre stage, creating the streets of London and other exotic settings through the use of video projections, designed by Philadelphia-based Video Artist Jorge Cousineau. Jorge is a recipient of two Independence Foundation Fellowship grants, a Lucille Lortel Award in New York City, and several Philadelphia Barrymore Awards. He was awarded the F. Otto Haas Award for Emerging Theater Artist and is a recipient of the Pew Fellowship in the Arts.

An awe-inspiring experience for those enthralled by Sherlock, Extremely Loud and Incredibly Close, and BTE audiences who treasured The Diary of Anne Frank. Rated MA for mature audiences, this show is appropriate for adults and older children. Some adult language and situations.

Bloomsburg Theatre Ensemble is a non-profit organization dedicated to Columbia County and surrounding areas for over 40 years. For more information, please visit www.bte.org.

Get area event news in your inbox!

Join our mailing list to receive the latest news and updates from Art of PA and The Exchange.

You have Successfully Subscribed!